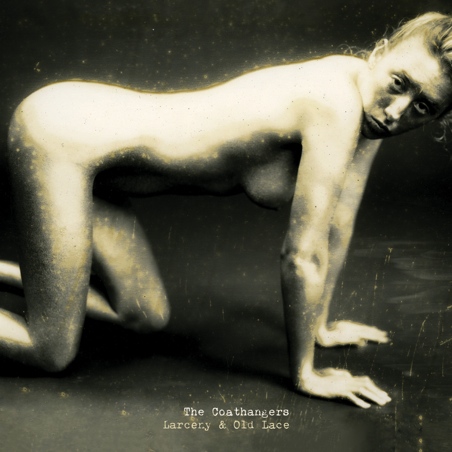 When the Coathangers formed five years ago, as something of a party joke, the band's four members had little musical education to speak of. But they're no joke now, having since released a pair of riotous albums, plus about a half-dozen trashy, cheeky, shrieking 7" singles. They're also grizzled road warriors, headlining bars from Fargo, N.D., to Allston, Mass., in between supporting gigs with the likes of the Thermals, Mika Miko, and These Arms Are Snakes.

Somewhere in all that, the Coathangers must've learned how to play. Larceny & Old Lace, the quartet's third album and second for Seattle-based Suicide Squeeze, carries over the chaotically hooky vitality of their previous records. But here, they've added more varied songwriting, (relatively) tighter instrumentation, and-- for the first time-- a real studio, the Living Room in Atlanta, where the band reunited with producer Ed Rawls (Deerhunter, Black Lips, Zoroaster). Named after a Mickey Rooney-guesting "Golden Girls" episode that was itself named after playwright Joseph Kesselring's screwball comedy Arsenic and Old Lace, the Coathangers' latest finds a notorious must-see live band finally capturing some of the energy of its shows on record.

Just because the Coathangers are taking their game more seriously doesn't mean it isn't still a game. With all four members trading off idiosyncratic vocals-- ranging from guitarist Julia Kugel's Victoria Jackson chirp to drummer Stephanie Luke's full-throated roar-- there's still plenty of jagged, playful aggression, whether that involves damning the titular jerk of "Johnny" over gloomy post-punk or tearing off faces between stabbing guitar and whirligig keyboard on "Chicken: 30". But the Coathangers now pay more attention to detail, starting with first single "Hurricane", which veers from raspy shouts and brittle guitar riffs to zombie-apocalypse cheerleader chants and ominous whispers shaded by clacking drumsticks. They also try on more styles: Where "Call to Nothing" pledges ill-fated devotion through scratchy guitar and heavy bass recalling the Slits, "Well Alright" rides a demented roadhouse blues and "My Baby" slows down to a loping love groove-- for stalkers. These might not be the furthest-out ideas, but they're new for the Coathangers, and they're executed with badass charisma.

Still, from the band behind such shrill yawps as "Don't Touch My Shit" and "Gettin' Mad and Pumpin' Iron", there's no bigger left turn than a soft, sentimental ballad. "Tabbacco Rd." sees the Coathangers making the shift with surprising ease, poignantly following a relationship from its first Tom Collins to the wedding chapel, and finally to the last goodbye. Speaking of goodbyes, the kitschy-scary keyboard and cathartic howls of "Jaybird" make it a fine memorial even if you don't recognize the lyrical reference to the Coathangers' former tourmate, the late Jay Reatard. Most impressive of all, though, and a should-be single, is "Go Away", a perfectly structured midtempo rocker that turns the tables on every dude who ever sang a whiny song about wanting to be more than just friends. It may have started as a simple gag-- "Hey, I like you/ Go away"-- but it's as serious as you want it to be.
Posted by Marc Hogan at 2:45 PM