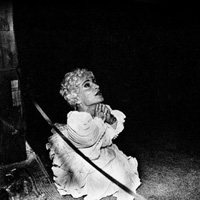 Halcyon Digest is a record about the joy of music discovery, the thrill of listening for the first time to a potential future favorite, and that sense of boundless possibility when you're still innocent of indie-mainstream politics and your personal canon is far from set. In revisiting that youthful enthusiasm, Deerhunter brilliantly rekindle it, and the result meets Microcastle/Weird Era (Cont.) as the band's most exhilarating work to date. Whether those halcyon days were real or just idealized doesn't matter. With producer Ben Allen, who lent a bass-heavy sheen to Animal Collective's Merriweather Post Pavilion, these four guys-- lead singer Bradford Cox, singer/guitarist Lockett Pundt, bass player Josh Fauver, and drummer Moses Archuleta-- have created a seamless album of startling emotional clarity.

Deerhunter have never lacked ambition. 2007 breakout Cryptograms came as two discrete halves: one front-loaded with ambient drifts and clanging post-punk aggression, the other blasting off into sunny psych-pop. Microcastle turned out to be a sprawling, ghostly amusement park of a double album, with violence and frail beauty never far from each other. And then there are all those EPs, side projects, and rarities. In blog posts and interviews, Cox has shown himself to be a music lover of the highest order, almost a platonic ideal of the artist as fan.

This record marks a distinctly different approach for the band, more streamlined and stripped down, and in its sparest moments, it echoes the stark intimacy and one-take effortlessness of records like Neil Young's Tonight's the Night or Chris Bell's I Am the Cosmos. Fans of the band's earlier stuff may understandably miss some of the old electric-guitar squall, but Halcyon Digest's expanded instrumental palette-- acoustic guitar, electronic percussion, banjo, autoharp, harmonica, vocal harmonies, and saxophone (!)-- creates endless depths of intricacy and nuance to explore in headphones.

In the past, Deerhunter's gift for garbled sonics and Cox's stream-of-consciousness methods made it easy to downplay the group's lyrical ability. That's not the case here. Whether by Pundt, who sings lead on two of Halcyon Digest's best songs, or Cox, Deerhunter's songwriting congeals into a style all its own, with lyrics moved front-and-center. The words fit perfectly together, down to the most trivial minutia: Cox asking, "Did you stick with me?" at the start of garage-pop fist-pumper "Memory Boy", right after the track people are most likely to skip (funny!), or Pundt mentioning a "marching band" on another uptempo proto-anthem, "Fountain Stairs", as Bill Oglesby's sax first appears.

The topical ground covered here is inspired, too: "Revival", a sort of Southern gothic folk-rock baptism, embraces religion. "I'm saved, I'm saved!" Cox exalts, "I felt his presence heal me." Recorded to four-track, "Basement Scene" "dream[s] a little dream" that soon turns nightmarish: "I don't wanna get old" quickly becomes "I wanna get old" as Cox weighs the alternative. And first single "Helicopter" is a beautifully watery electro-acoustic farewell that uses a tragic Dennis Cooper story about a Russian prostitute (graciously reprinted in the liner notes) to support its emotional bleakness.

Then there's seven-and-a-half-minute finale "He Would Have Laughed", dedicated to Jay Reatard, the Memphis garage rocker who died last winter of drug-related causes at age 29. Its lyrics are the most cryptic on Halcyon Digest-- full sentences are rarely formed before Cox closes them off with his usual crisp consonants. A simple acoustic guitar riff repeats as other percussion elements and electronic tones pan across the track, occasionally joined by the full band. Cox admits to growing "bored as I get older," and then goes into a dream-- "I lived on a farm, yeah/ I never lived on a farm"-- until he finally all but asks, "Where are your friends tonight?" The track cuts off unexpectedly mid-note.

Deerhunter unveiled their new album by asking fans to print out a vintage DIY-style poster, photocopy it, and tape it up all over town. In the last couple of weeks, band members have participated in all-night online chats with some of their most devoted fans. We'll never be able to parse every lyric or tease out every technical intricacy-- though somebody will probably try-- but that is what Halcyon Digest is all about: nostalgia not for an era, not for antiquated technology, but for a feeling of excitement, of connection, of that dumb obsession that makes life worth living no matter how horrible it gets. And then sharing that feeling with somebody else who'll start the cycle all over again.
Posted by Marc Hogan at 8:33 AM

Delaware Chancery Defers to Board on M&A Strategy

The Peculiar Case of the Jailbird CEO

Ciara - The Princess Is Here 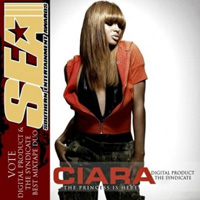 Here we go again. On 2004 debut Goodies, Ciara Harris really did deserve her title as the "princess of crunk&B," a Lil Jon-bestowed honorific that turned out to be premature only insofar as you still call anything "crunk&B." Since then, the Atlanta starlet has been the artistic equivalent of the tease from that album's chart-busting title track: She'll tantalize with stunning electro-R&B singles, but her albums never quite bring home the goods. So the sensual seduction of 2006's "Promise" gave way to half-baked sophomore effort Ciara: The Evolution; CiCi's third album, last year's roundly disappointing Fantasy Ride, didn't even spawn a better than so-so single of its own, but it did follow a poised, mature guest spot on Enrique Iglesias' Greatest Hits hit "Takin' Back My Love". You get the idea.

Fourth album Basic Instinct is beginning to look like a case of déjà vu. Ciara's label keeps pushing back the release date. BET banned the desperately floor-humping video for uninspired first single "Ride". And this summer The-Dream, supposedly set to executive produce the record alongside Tricky Stewart, actually quit Twitter after he was quoted suggesting that if Ciara's next album flops, she's finished (he says he was taken out of context). In the meantime, the Internet's powers-that-be have leaked a few pretty great tracks, plus several others that explain all the delays. A couple of online mixtapes collecting various potential Basic Instinct material are floating around out there. While another bootleg, Ride It, has more songs, The Princess Is Here is a better, more cohesive listen. Either way, the results so far are discouraging.

When Ciara gets a summery, sultry ballad she can still own it like nobody else. A case in point is The-Dream duet "Speechless", which basically takes the giddy smolder of her "Promise" and the meta-absurdity of his "Falsetto" and turns them into something horn-bedazzled and radiant, crazy in love as much as in lust. Another is "I Run It", a rare moment on The Princess Is Here where Ciara really sounds like the boss-- and exuberantly, melodically so, all twirling synths and pillowy beats, with a little something otherworldly, too: "So let this ATLien give you what you deserve." Self-proclaimed "banger" "Gimmie Dat" is no ballad-- just the opposite-- but its hyperactive dancefloor wiggle combines with an icier, more robotic vocal, serving as sort of a circa-2010 equivalent to 2004's "1, 2 Step". These are the highlights.

But it's like even when Ciara wins, she loses. The mixtape version of "Speechless" strips away The-Dream's weirdly sweet, old-fashioned verse, instead leaving Ciara emoting awkwardly: "Your love is my muse/ No more will I have to choose." Um. Other tracks that appear to aim for similar sensuality just fall flat. "This Is What Love Is" is like a trance-inspired take on the breathy spoken word of Janet Jackson's vastly superior "That's the Way Love Goes"; "Upside Down" renders unsexily explicit what "Promise" was confident enough to evoke. Another problem: When Ciara ad libs, she comes off as deeply boring as she did during The Evolution's misguided inspirational interludes. At one point, thanking her fans for their support, she says blankly, "It means so much to me." A politician never sounded so rehearsed, which makes it harder to root for her.

The rest of The Princess Is Here is most interesting when Ciara reaches out toward rap. First there's "Ride", on which Ludacris reprises his starring role from 2004's impossibly slinky "Oh". Here, though, he's uncharacteristically lazy ("Ride it like a thoroughbred?" Luda!). Also less than his typical spectacular self is André 3000, who appropriately endorses Ciara as "Chaka Khan fine, Anita Baker sweet" on a "Ride" remix. Gucci Mane is amusingly obvious, as usual, on "Feelin' on My Ass", although the scolding refrain contrasts oddly with other songs' naked shamelessness. Yo Gotti and Waka Flocka Flame also make leering tough-guy appearances. While the "Eye of the Tiger"-sampling "Basic Instinct (U Got Me)", on which Ciara actually raps, isn't here, she does jump ably on a Young Jeezy instrumental for "Lose My Mind"-- one of too many complaints about haters-- while her Soulja Boy response "Pretty Girl Swag" is a reminder, like Fantasy Ride's "Pucker Up", that swag simply isn't this Princess's strong suit. Just a thought: Now might be a good time for Lil Wayne, who famously (and endearingly!) proclaimed his love for Ciara on 2007's Da Drought 3, to scrounge up a "Get Out of Jail Free" card.
Posted by Marc Hogan at 10:39 AM

Rollovers Outpace Other IRA Contributions 10 to 1

Why a GM CEO Is Hard to Find

Companies Behind on Social Media Risks

How Occidental’s Board Is Handling Activists’ Criticism

AIG to Get $90M in Shareholder Suit Settlement

"If I'd returned from a fight, then people would've called me a hero," goes the chorus to the title track from Jenny Wilson's second solo album. But when a woman rolls out of the delivery room, there's nobody handing her any medals. Hardships! confronts the domestic and psychological toil of contemporary motherhood with some valiantly unlikely weapons: the syncopated clatter of post-Timbaland R&B, the organic expressiveness of Nina Simone jazz, and Wilson's own icy melisma, previously heard assisting fellow Swedish invaders Robyn and the Knife.
Posted by Marc Hogan at 3:40 PM

Soundcheck: Tale of the Tape

Costs have "polarising" effect on managers

State Street Fights Off 401(k) Claims, but Not CitiStreet

How to Tell When Management Is Lying: Study