You Were There: The Complete LCD Soundsystem 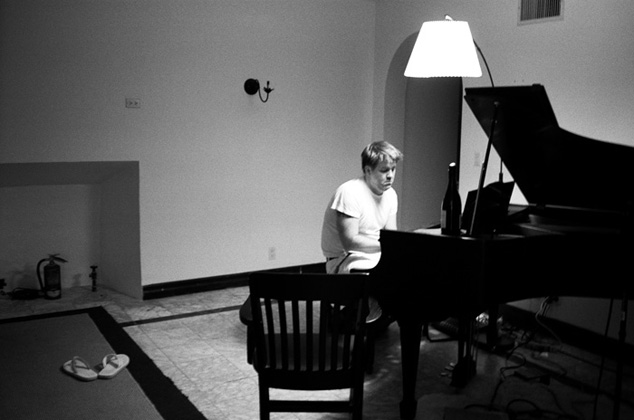 HP Takes Heat Over CEO’s Part in Board Overhaul

The Mountain Goats - All Eternals Deck

Damning vampires and surviving with eloquence

Crunchy and Creamy: Don't care about "Young Folks"? Neither do these guys.

Technically, Peter, Bjorn and John are one-hit wonders, but they sure are a multifaceted bunch. Breezy first encounter "Young Folks," from their 2006 breakthrough, Writer's Block, whistled its way to global dominance, but follow-up single "Let's Call It Off" was memorable enough for Drake to sample on his own career-launching mixtape, So Far Gone. In the meantime, the Stockholm trio have delved into beachcomber electronics (2008's Seaside Rock) and fractured hip-hop rhythms (2009's Living Thing, with an F-bomb chorus a year too early). If Peter Morén's solo bow was clumsy, Bjorn Yttling's production work for Lykke Li and others continues to impress.


On PB&J's sixth album overall, the group again changes tack, tapping an outside producer and reverting mainly to guitars, bass, and drums. Gimme Some has a punk-octane velocity that sometimes leads to bitterness -- toward critics (the Buzzcocks thrash of "Breaker Breaker"), Swedish royals (R.E.M. jangler "[Don't Let Them] Cool Off"), and pessimists (krautrock night-drive "I Know You Don't Love Me"). Sometimes it still leads to romantic melancholy -- burial ballad "May Seem Macabre" or punk-pop sleeper "Lies."

But even when trading whistling for cowbell, there's something these three songwriters always remember: "You can't, can't count on a second chance." If the least they do is keep revealing new shades of the familiar, it's worth sticking around and seeing this band through. 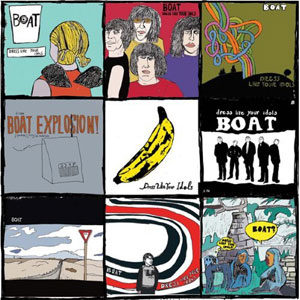 BOAT mainstay D. Crane is archetypal of a certain sort of thirtysomething indie dude. He's brainy and at least somewhat socially conscious (he served half of a two-year stint in Teach for America), he knows his way around music-friendly metropolises (currently living in Seattle, he did his TFA time in Chicago), and he can certainly identify with The Boston Globe sports writer Chad Finn's excellent blog about classic sports cards (BOAT's 2008 Topps 7" EP came with five hand-drawn cards, plus a stick of bubblegum). Crane's band, meanwhile, has been working on the fringes of the indie rock mainstream, receiving generally positive reviews.

BOAT's fourth album, then, finds the Crane-fronted four-piece going through something of an underachiever's quarter-life crisis. On one hand, Dress Like Your Idols sees Crane, drummer Jackson Long, bassist/guitarist Mark McKenzie, and multi-instrumentalist Josh Goodman finally making their way into a real studio for the first time. On the other hand, that studio-- Seattle's Two Sticks Audio-- is already defunct. And the songs, like the album cover, are as inspired by the band's youth as ever, merging Stephen Malkmus's obliquely deadpan twang, Tullycraft's sugary scene-skewering, and Modest Mouse's "reptile boy" yelp. Where some slightly younger slackers have been opting for warped 1980s synth-pop, BOAT continue to love the 90s: an era when they didn't know, as per the rueful title track, that "the job you wanted doesn't exist." The result is the best album yet from a band whose style finally appears to be back in vogue, though its sometimes-bitterly sardonic humor still won't be for everybody.

When BOAT apply their new-found professionalism, Dress Like Your Idols outdresses more than just famously schlubby Doug Martsch, whose Built to Spill is one of nine bands paid tribute to on the album's memorably meta cover. First single "(I'll Beat My Chest Like) King Kong" sets a basic pop hook ("I'll love you if you love me") over crunchy guitars and boisterous drumming that could please fans of such similarly 90s-minded bands as Surfer Blood, Yuck, or Free Energy (remember, the 90s also loved the 70s: Weezer, people!). John Roderick, whose underrated group the Long Winters gets its own album-cover homage, adds his drowsy, Pedro the Lion-ish backing vocals to "Landlocked", the record's screeching, pent-up emotional centerpiece. As Crane sarcastically boasts elsewhere, "If looks could kill, I'd slaughter you."

While the caustic, slightly self-pitying edge to PBR-pumping power-pop anthems like "Classically Trained" (which targets those lucky souls "making art for a living") and "Kinda Scared of Love Affairs" (which begins, almost a cappella, "I'm not sure I want to be good-looking") may put a few people off, it's hard to fault the successfully bombastic execution for anything except cozy familiarity. "In time you'll become a cynic," hyper-referential "When Frank Black Says (No. 14 Baby)" warns, adding, "We're just like you." When Dress Like Your Idols transcends the archetypal 30-ish indie dude's perhaps understandable cynicism, BOAT resemble their heroes in more ways than one. That's why the most revealing lyric, ultimately, turns out to be this: "Nothing seems impossible to me."
Posted by Marc Hogan at 1:24 PM 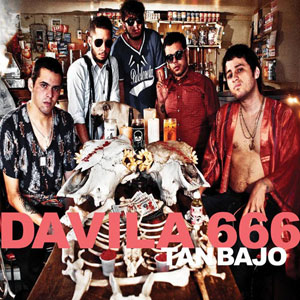 For the right kind of fuzzed-out rock band, gaining a bigger audience doesn't have to mean leaving the garage. Sure, these days plenty of lo-fi acts-- from Wavves to Dum Dum Girls to Cloud Nothings-- have left the scuzzy sonics behind, as Pitchfork contributor Martin Douglas recently noted over at Passion of the Weiss. And it definitely works when, say, Smith Westerns embrace swooning Britpop balladry, because those Chicago glam-brats' songs already had a certain teen-dream sweetness to them. But their former tourmates Davila 666 are a different case. You wouldn't hire a big-budget remixer to scrub the grit out of "Wild Thing" or "Louie Louie", would you?

Like its Nuggets-crushing forebears, this Puerto Rican six-piece earns a place on your next house-party playlist with sheer anarchic energy, not to mention a formidable gift for language-transcending hooks. On Davila 666's underrated 2008 self-titled debut album-- plus a handful of vinyl-only releases for HoZac, Douchemaster, and Rob's House-- they established themselves as gleefully filthy purveyors of indecipherably catchy garage-pop. Thankfully, Tan Bajo doubles down on the group's strengths, delving deeper into screeching sonic chaos while adding an even more memorable batch of songs to shout along with, whether or not you understand the words.

That means Davila 666's sophomore album is still rowdy enough for an impromptu weekend binge with a few friends, but it also offers enough carefully crafted tunes and feedback-streaked textures to fill your headphones. Stylistic tropes from classic 1960s girl groups complement raucous guitar licks on harmony-drenched "Yo Seria Otro", with its call-and-response verses and touches of strings, as well as on waltz-time "¡Diablo!", with its brutally earnest spoken-word section. Meanwhile, the Velvets-JAMC scree explored on the earlier "Ella Dice" only expands on the hypnotically pounding "Si Me Vez..." or the instant-earworm advance mp3 "Esa Nena Nunca Regreso". When the band breaks into a full Ramones sprint on "Mala" or "Patitas", anyone with a playground-level knowledge of Spanish can still catch the gist: mierda, caliente, cerveza, cucaracha. That said, at plenty of times Davila 666 continue to delight in their inscrutability, as on the distantly crooned opener or the chocolate-jingle hidden track-- inside jokes, maybe? In any event, such dumb fun is a necessary part of what the train-whistling, irrepressibly hey-hey-ing "Los Cruces" reminds us, in a rare English-language moment, is only "rock'n'roll."
Posted by Marc Hogan at 1:19 PM

For Audit Committees, ‘Now Is the Time’ on IFRS: Lawyer

Shareholders Back Annual Pay Votes 2 to 1 Over Triennial

Zen and the art of getting indie-rock dudes to dance

Off-kilter psych-pop tunes and ultra-sleek dance beats share plenty of DNA. The Beatles owned an early Moog; Electric Light Orchestra used Giorgio Moroder's studio. Starfucker is another computer-OK purveyor of candy-colored guitar confections, part of a line that runs from Flaming Lips to Super Furry Animals to Of Montreal to MGMT. With dance-rock standouts like "Julius" and "Bury Us Alive," the Portland quartet's third album is its best yet. It's also the third straight to sample '60s hippie guru Alan Watts over gaudy '80s synths. If the overarching life-from-death concept doesn't quite cohere, well, that's probably healthy.
Posted by Marc Hogan at 5:13 PM

Toro Y Moi - Underneath the Pine

With 2010's Causers of This, Chaz Bundick ambled to the front of the bedhead synth-pop scene -- dubbed chillwave after a blogger's in-joke. The South Carolinian's second album as Toro Y Moi keeps that unhurried glide, but ditches the electro-R&B samples for ornately funky lounge pop, often with a live, improvisatory feel. David Axelrod's plush grooves, Ennio Morricone's CinemaScope expanses, Brian Wilson's tragic kingdom: Underneath the Pine has deep roots. And, beneath woozy sighs and richly varied arrangements, deep uncertainties. "I can wait," Bundick insists on psych-pop stunner "Elise." Save the last laugh for him.
Posted by Marc Hogan at 4:07 PM

The Envy Corps are free. Lead guitarist Brandon Darner remembers the exact moment of their emancipation. On Oct. 16, 2008, the Des Moines-based quartet was about to play Schubas, in Chicago’s Lakeview neighborhood, when an e-mail came through on Darner’s smart phone: Universal subsidiary Vertigo Records was releasing the band from its major-label record deal. The guys high-fived each other.

Borders Bankruptcy a Defeat for Ackman

How Contentious Will Proxy Season Be?