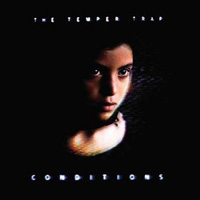 The Temper Trap didn't come out of nowhere. But even in an age of instant global communication, Australia is still pretty far away from most of the rest of us. So when this Melbourne rock foursome with stadium-sized ambitions first landed in my inbox last October, it was a modest revelation. Curtis Vodka, Alaska's remixer extraordinaire, was pushing all the right tech-textural buttons on an epic reworking of "Sweet Disposition", a majestic anthem which, if annoyingly derivative, had "mainstream hit" written all over it. Listeners who Shazam'd the original after hearing it in ads for Sky Sports TV in the UK-- or, stateside, on the trailer and soundtrack to alt-emo romcom (500) Days of Summer-- probably know the feeling.

Hemispheric differences may have given the Temper Trap room to develop their radio-friendly sound without getting pushed prematurely into the spotlight (for real: sorry, Black Kids), but otherwise their debut album could've been made just about anywhere. Conditions is one for the Coldplay set-- all tightly executed grandiosity and U2 pedals, generally with pounding drums, soaring vocals about steadfastness or mortality or whatever, one rumbling bass note per arpeggiated guitar chord, and a modest drizzling of synths. Unfortunately, when you adopt the trappings of revolutionary significance without showing much interest in advancing beyond the revolutions of 20 years ago, you sound ridiculous. Southern conservatives are super concerned about racial discrimination now, you guys.

Defined by almost any measure except musical creativity or lyrical ingenuity, the Temper Trap are a lot better than I'm making them sound. Dougie Mandagi's virtuosic falsetto is the kind of instrument that should come with a money-back Jeff-Buckley-comparison guarantee. When Mandagi comes in, over ecclesiastical keyboard stabs and handclaps on opener "Love Lost", there's a brief glimmer of hope Conditions will end up being more like TV on the Radio, with all that New York group's restless adventurousness, than, um, whichever band we gave that "U.2" rating. His bandmates are no slouches, either, as instrumental finale "Drum Song" shows. If its jagged rhythmic attack owes something to Arctic Monkeys, then it's no coincidence-- producer Jim Abbiss also helmed the brainy Brits' fateful debut, along with albums for Kasabian, Adele, and others.

What the Temper Trap do devastatingly well is drape post-office-party mistake-hookup tackiness in the lofty imagery of global struggle. You can just picture Mandagi standing on a mountaintop for "Sweet Disposition", his hair blowing in Bono's wind, but remember, ladies: Some insincere sketchball with limited imagination is going to use this to try to get you to have sex with him. "Just stay there/ 'Cause I'll be coming over," Mandagi booms. "Won't stop to surrender." Well, love is a battlefield, right?

Elsewhere, the Temper Trap's pairing of sweeping portentousness with mundane douchebaggery is trickier to overlook. "I pledge myself allegiance to a battle not to sleep at home," Mandagi clarifies on another single, the reasonably catchy uptempo electro-rocker "Fader". Synth-dripping slow jam "Fools" adds, "I want it, I want it, I want it," amid rebukes to unnamed, uhh, fools. Cold War Kids-ish indie nod "Down River" pulls out all the orchestral, choral, and vaguely baptismal flourishes in Neon Bible's book to repeat, "Go, don't stop." And remember "Love Lost"? It adapts a line from "Amazing Grace" into a request to "flash your heart." Yeah, open up your shirt and-- ohhh. One more in the name of love: Latest UK single "Science of Fear" samples Robert F. Kennedy's famous remarks on the death of Martin Luther King, Jr. I take it Mandagi still hasn't found what he's looking for.

It's telling to learn where, in fact, the Temper Trap did come from. The first thing producer Abbiss apparently heard from the band was a demo of "Soldier On", Conditions' Muse-rific nadir. Mandagi tells the BBC, "His wife really liked it so apparently they had a moment together and out of obedience to his wife Jim decided to record us." The six-minute track moves from Grace-ful guitar and falsetto into gnashing prog-rock bombast, until Mandagi is seriously howling at "death." I'm gonna assume he means the little one-- what the French call "la petite mort." 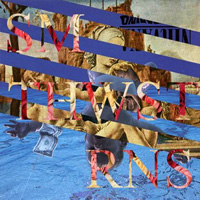 Girls know what boys want. But a little subterfuge can still go a long way. On his hit single, 22-year-old singer/rapper Drake insists, "This one's for you," then cops some "gray sweatpants, no makeup" sweet talk en route to envisioning himself "all up in your slot." He recently admitted to MTV that "it's not the most heartfelt song." Where Drake talks dirty and sounds Auto-Tune clean, the Smith Westerns take the opposite approach. Like the Beatles, though, these four Chicago teenagers don't want to hold your hand-- they want to do more.

Don't let the Fab Four mention throw you: From this young Windy City group, retro-rock doesn't feel like a history class. Rummaging through 1970s glam, Phil Spector teen-pop, and Nuggets garage-punk with the youthful abandon of kids finding new toys in the attic, the Smith Westerns' self-titled debut exudes an earnestness almost as pure as its recording levels are deafening. Their simple, sweet choruses about boys and girls in love could spike the punch at a 1970s TV show (OK, "Freaks & Geeks"/"That '70s Show") school dance. Parent chaperones would be none the wiser.

When singing guitarist Cullen Omori, his bassist brother Cameron, second guitarist Max Kakacek, and a drummer known to Google only as Hal have the tunes to make themselves heard over their vintage aesthetic, The Smith Westerns' teenage kicks are hard to beat. Take string-swept glam ballad "Be My Girl", which softly punctuates one of the year's most wrenchingly innocent hooks with somewhat pervier pick-up lines. There's less lyrical subtext, but no less raunchy production, on the glam-rock boogie of "Girl in Love", a come-on cursorily addressing the fleetingness of youth. It's only fitting that in a year-old YouTube video featuring scratchy sockhop swooner "Tonight", the Smith Westerns both look and sound like the Black Lips' good-bad not-evil twins.

These guys are sort of literally true to their school-- garage-rocker Miss Alex White is a fellow Northside College Prep magnet-school alum-- and their time on the road with the likes of Jay Reatard and Nobunny is evident on fine 60s-style frat-rocker "Gimme Some Time". With fuzzed-out xylophone, frenetic opener "Dreams" suggests the group's most recent tour with Girls and Los Campesinos! might serve them better for a follow-up. "Diamond Boys" almost earns its piano on the strength of its adolescent grandiosity, but "We Stay Out" lets lo-fi become the end rather than the means, with a guitar line that sounds like a bee buzzing underwater.

Japandroids, another loud punkish group concerned with youth and girls, ask a cathartic question on Post-Nothing's "The Boys Are Leaving Town". DFA signees Free Energy channel Thin Lizzy's "The Boys Are Back in Town" on their recent "Dream City" single. The Smith Westerns turn to lighthearted psych-folk for their own declaration: "Boys Are Fine". Then, on blithely woo-oohing fuzz-popper "The Glam Goddess", they actually go and say it: "I wanna hold your hand." Boys will be boys.